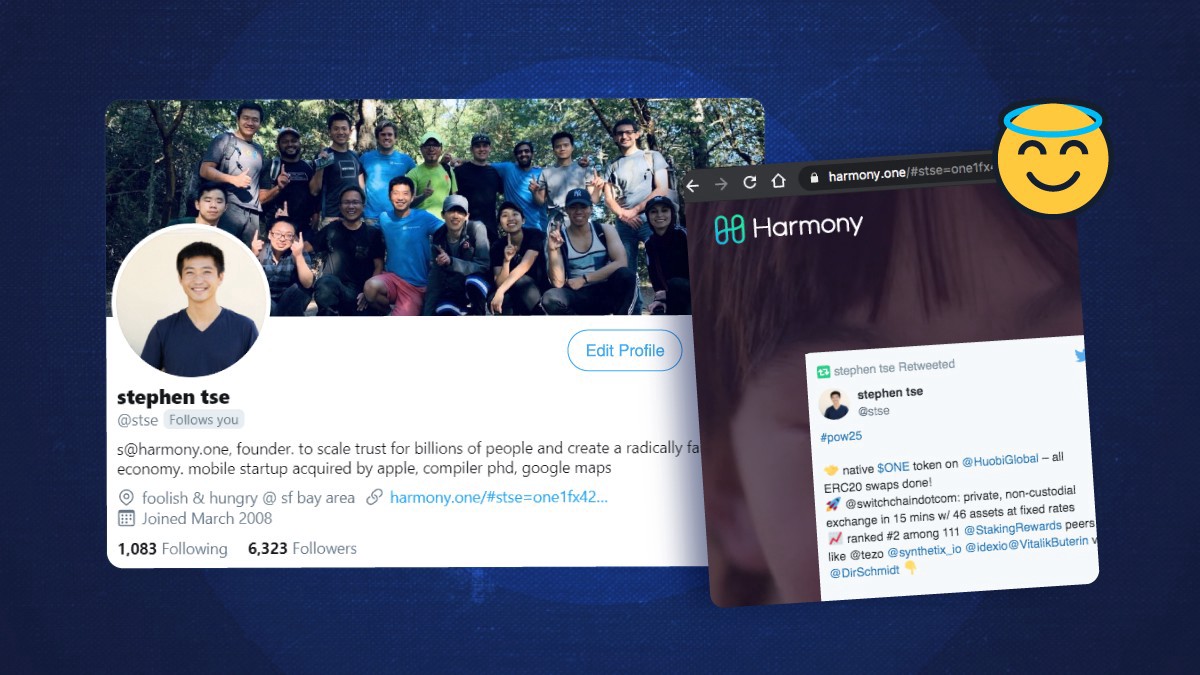 The measure of intelligence is the ability to change.

Beyond Staking — evolution to a fintech company

The pace of change in blockchain can leave you breathless at times. June saw the emergence of new DeFi darlings $COMP and $BAL and a surge in the value of USD locked in protocols as yield farming became the hot topic of the day. There are currently $1.62bn dollars locked in DeFi, up from $1bn as recently as two weeks ago. As many are discovering however, the gas fees alone are a significant barrier.

It doesn’t take much imagination to see Harmony’s fast finality and low fees would facilitate these bold new experiments and we look forward to the first wave of decentralized finance products leveraging the power of Harmony. However, this is the tip of a much larger iceberg. DeFi is still nascent and understood by few. There are simpler problems to solve that impact far more people. This is the focus of our cross-fi research and development and it brings with it one simple idea — think of Harmony not as a blockchain project but as a fintech one. Focused on enabling faster, more efficient financial products with radical transparency.

The recent BIS (Bank for International Settlements) report on the impact of global stablecoins states:

Recent GSC (Global StableCoins) initiatives have highlighted the shortcomings in cross-border payments and access to transaction accounts, and the importance of improving access to financial services and cross-border retail payments. However, it remains to be seen whether GSCs will indeed be able to overcome the shortcomings of existing payment systems.

A clear problem exists but to tackle it head on we must focus on a) compliance b) ease of use for partners and c) liquidity (stablecoins, swaps and lending). This, alongside building a network of local partners in specific locales. (see a16z June newsletter for a parallel insight in Big Fintech). It makes no sense for us to replicate the Ethereum eco-system or poach developers with the promise of oversized grants. We see a proven pain point to solve and will build out from there.

Now staking is fully operational and stable with 3.6bn ONE actively staked we have turned our attention aggressively towards adoption via grants and an internal hackathon to demonstrate the utility of our blockchain. We are currently reviewing the first round of grant submissions covering oracles, tooling and KYC mechanisms but the grant scheme is still open to anyone looking to develop ideas for fintech integrations or zero knowledge proofs.

Internally the team has been galvanized by the opportunity to deploy their creativity into #buidling and battle-testing the SDK with their own dApps. There are currently 12 individual demos being built with the first already live. Harmony Angels went live at the end of last week, encouraging committed community members to engage and be rewarded for spreading the word. Share your experience of our demo dApps like soccerplayers NFT ⚽ or harmonauts NFT 👩‍🚀️ or goodone crowding funding 🙏? There are more at harmony.one/demos.

Ganesha created an easy to follow video demonstrating how he deployed the smart contract for the SoccerPlayers game which you can find here.

The big development this month was the proposal to move from 320 elected seats to 640. This was the second modification to the protocol following the reduction of the undelegation delay from 7 to 0 epochs and was designed to increase access for smaller and unelected validators. We found the relatively small number of open slots was pushing the median stake prohibitively high and negatively impacting the decentralization of the network. This is a major rebalancing of the network economics and is being done in two phases, firstly from 320 to 480 seats and then from 480 to 640. The change was deployed in consultation with the community and is another example of just how valuable the community is in the design of the protocol.

Other highlights include finalising resharding and fast-sync design to reduce overhead on validators; the HRC20 deployed on testnet and a new version of AutoNode specifically built for mainnet.

Our engineers have also been adding Elastic Search (ES) integration which will help our validators gain more insight into the performance of their nodes and assist them in monitoring and debugging problems themselves, even without deep technical knowledge. In the long run this will help Harmony to become even more decentralized, where validators have to rely less on the Harmony team or POPS Pangaea Ops Captains to provide support.

The ERC20 tokens held on Huobi can finally be swapped to mainnet tokens.

Following the announcement of BUSD as a mainnet asset on Harmony we have been busy with the contract audit, wallet integration and testing. Alongside the Switchain integration two new wallets have been successfully added — Edge Wallet and Frontier Wallet.

We are continuing to refine our cross-fi proposition with Sahil leading the team.

We continue to be amazed by the support and energy of our core community and we will be working hard to make it easier for smaller validators to be elected in an upcoming campaign. There are now two new community built options to try out, from Kysen Pool and Smartstake. These give validators and delegators additional insight and analytics to help them decide how to deploy capital. Our friends at Sesameseed ran a two week staking campaign to encourage delegators to try out their multichain wallet and staking derivatives. Huge thanks to their team for their energy and support. Finally, Michael Otis, one of our earliest supporters has built an entire suite of new dApps which can be accessed at Ript.io.

June was a month of transition and settling following the launch of Open Staking. We are now fully focused on the transition to a fintech company which brings with it the need for greater regulatory scrutiny and diligence in managing the flow of information from team to token-holders. There is much to look forward to but we will not make announcements of announcements, releasing information only when it is ready to do so.

Thank you for your continued support. I look forward to bringing you more news in the next letter.

Be The ONE and Stay in Touch